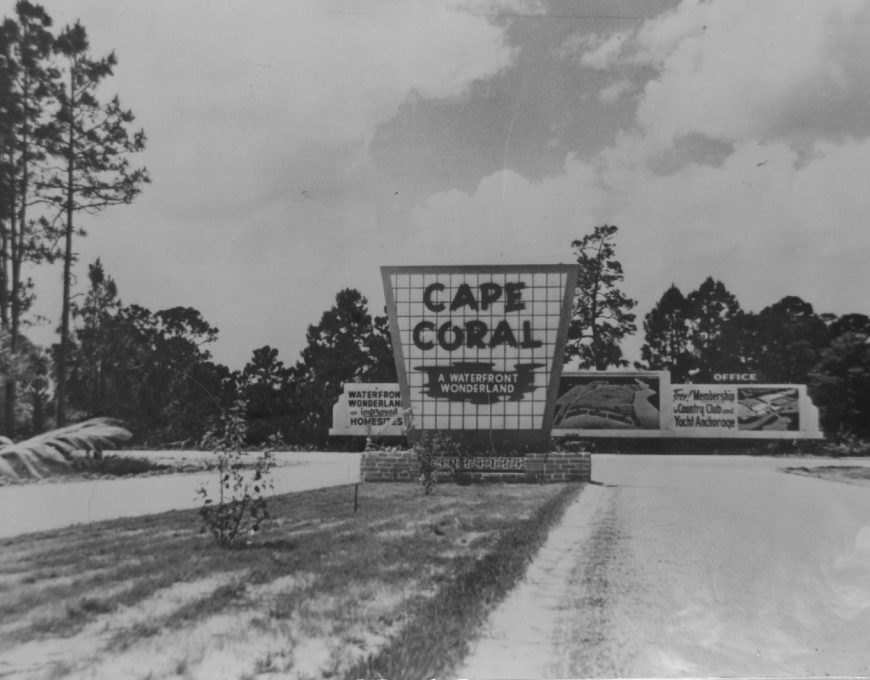 Where does the immense attraction of Cape Coral come from?

Anyone who travels to Cape Coral as tourist today, is welcomed by a modern residential city where life pulsates. An almost unlimited selection of water sports delights almost every adventurous tourist. From swimming, diving and water skiing to kayaking or boat trips – anything is possible. If you are a landlubber, you can explore the area on horseback or on inline skates or relax on the golf course. To relax, head to the dream locations of Fort Myers, Lovers Key or Sanibel and Captiva Island. You will think you are in paradise.

But this paradise is made by human hands. The second largest city in Florida in terms of area has only emerged in the 50s of the last century. Maybe it would not exist if it had not been for Leonard and Jack Rosen. Two brothers from the city of Baltimore, over 1,000 miles (1,609 km) away, who probably thought of many things when they founded Cape Coral, but they it was unlikely that they thought of relaxation.

The Rose Brothers – sales talents with a vision

Leonard and Jack Rosen were typical children of the emerging television age. At an early age, the gifted salesmen recognized how effective they were with their products, and that the TV could bring their product (a hair care product amongst other things) into the living room of the end user. They are considered the inventors of so-called infomercials. The business flourished and the brothers used the proceeds to start the real estate company Sandy Investment Company Inc.

In 1957, the company, later known as the Gulf American Land Corporation, acquired a huge piece of marshland on the Caloosahatchee River for just under $ 700,000. An anecdote about the founding history appeared in 2017 in the News-Press. According to the story, Leonard Rosen is said to have visited the doctor for the treatment of his foot problems at the Charlotte Health Spa in Charlotte Harbor, where he was told of a huge area of fallow land, which immediately attracted his interest.

His brother Jack was immediately impressed by the idea of creating something great here. In an incredible feat of strength, a large number of waterways emerged within a very short time. The wetland was drained. As early as 1958, the first 8 detached houses were built on today’s Riverside Drive and Flamingo Drive.

The founding of Cape Coral in fast motion

Land sale from the plane

Since large parts of the area could not yet be driven by car, the Rosens sold the individual plots of land unceremoniously from the aircraft. The interested parties were flown over the country with a Cessna and were able to drop a flour sack over their desired property. A kind of sale that had probably never existed before in this manner.

The demand was so great that up to 500 prospective buyers had to be transported every day. To further stimulate demand, the Rosens had Cape Coral Gardens built as a first attraction, that location is where now the Tarpon Point Marina is located. Even celebrities, like Hollywood star Bob Hope and jazz legend Duke Ellington, for example, helped raise public interest in this part of Florida.

In retrospect, it seems almost impossible, what Leonard and Jack Rosen created in Cape Coral almost out of nothing. At the end of the fifties, two years after the development work had begun, there were a total of 280 inhabitants. This made Cape Coral way to small to garner a spot on a map. These first few hundred people have now grown to around 180,000. This makes Cape Coral the most populous city of Lee County in southwest Florida.

The opening of the Cape Coral Bridge in March 1964 made an important contribution to this rapid development. As a result, the inhabitants who wanted to travel to Fort Myers were spared a major detour, which they had to accept until then. Just a few years later, it finally happened. In 1970, Cape Coral became a city and thus received the status of a registered municipality. From then on, the city attracted even more people. Since 1997, with the Midpoint Bridge, a direct connection to the Interstate 75 was inaugurated, Cape Coral is one of the fastest growing cities in Florida. A trend that continues unabated today.

This is what the tourist expects today

Thanks to the foresight of the Rosen brothers, visitors to Cape Coral are no longer reminded of the former swamp landscape. Instead, he will experience a city that, because of its youth, still gives the impression of being permanently on the move. Everything is in motion. The inhabitants as well as the tourists. The shops are colorful and varied, the selection is almost limitless. More and more top notch restaurants offer their culinary delights on an international level. The pressure of competition is great. The kitchen is as diverse as the people who move to Cape Coral. And the real estate market is still booming. In the area of the old Yacht Club, which has lost none of its importance for the city since its foundation in the early 1960s, existing real estate and undeveloped land is already in short supply.

You’re interested in
a holiday villa in Cape Coral.
HERE you get
more information

The planned downtown Cape Coral will probably increase the demand for real estate even more. Currently, the urban area extends to almost 185 square miles. But despite all the hustle and bustle, Cape Coral has never lost what makes the city so popular with travelers from all over the world. Here you can relax for a few weeks of the year and gather new strength for everyday life at home. The vibrant life in the business districts and the perfect peace and quiet at the pool in the vacation home or the serenity in one of the many landscaped parks are just minutes away. That’s what makes Cape Coral so uniquely appealing.

Next Story:
Excursion destinations in Cape Coral and surroundings

Are you looking for a completely furnished holiday home or a fantastic villa in a prime location in Florida? Then look no further! You have found it here in Cape Coral!

Good to know when you visit Cape Cpral